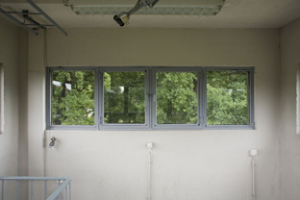 Goethe-Institut Niederlande, Rotterdam.
On Tuesday 5 January at 17:00 hrs, the exhibition will be opened by Koos Bosma, professor History of Architecture at the Vrije Universiteit Amsterdam.

For the first time the complete project ‘Berlin’s Covered History’ will be exhibited. This project looks at the history of the European continent with which one is unavoidably confronted in Berlin. Through image and title, De Jong links specific sites in today’s Berlin spots with historical events that took place in the last century. Events during WW II and during the period of separation of East and West Berlin. Besides ‘Moldova’s Water’ will be shown. A search for water in Moldova, Europe’s forgotten, and poorest country.

(The watchtower at the Border Section Schlesischer Busch. One of the former 302 observation towers that stood alongside the Berlin Wall. This leadership room offered a 360° view and from here the siren and searchlight could be operated.)