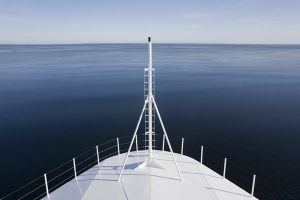 Opening of the exhibition:
Sunday 17 april 2011 at 4 pm. by the author Jan Brokken

The actual reason for the small and personal project Ice Edge – IJsgrens was a photograph from 1955 in Anja de Jong’s family album. It shows her father, Pieter de Jong, engineer on a small coaster, next to the ship on the ice of the Isefjord in Denmark. The ship, the Depa, lies frozen and is waiting for an icebreaker. On two identical sea journeys to the Baltic Sea and the Gulf of Bothnia in 2008 and 2009, De Jong took photographs of the sea in different atmospheric conditions and was in search of the ice edge, As a result of climate change, the ice edge in normal years is now much further north than at the time of my father’s voyage.The underlying idea of the project is climate change. But the series mostly ‘pays tribute to the sea’.

Collector’s item:
At the opening a special designed folder by Vincent van Baar with 3 signed and numbered photos from ‘Ice Edge – IJsgrens’ by De Jong is presented.