In 2012 De Jong worked as artist-in-residence at Woody Point, Newfoundland, Canada in the Gros Morne National Park. While doing research at the Marine Station at Norris Point, she came upon a document with a list of coded items that aroused her curiosity. It contained a (dated) list of archaeological sites in the park where various discoveries have been made.

The code used is the Borden System, an archaeological numbering system used in Canada. She was particularly intrigued by the number of sites mentioned and the amount of evidence of human presence in this isolated and seemingly inaccessible spot, on an always sparsely populated and climatologically unattractive ‘rock’ (the Canadian nickname for Newfoundland). The reasons for settling here are the year-round supply of food, the renowned hard stone from Cow Head and Ramah Bay (used for making tools and weapons) and the availability of materials for building and heating using animal skins and felling trees in the forests. It appears that the discoveries covered a period of more than 5000 years and belonged to no less than five cultures. Trough image, code and title, De Jong links specific sites in today’s Gros Morne with the cultures that used to live here. 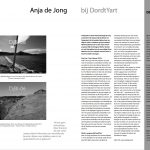